Earlier attempts had been made to drain the fens, but in 1631, the Adventurers, led by the Earl of Bedford (later became Dukes), began the first serious attempt to drain what is now known as the Bedford Level.  This included the digging of Bevill’s Leam which along with other drainage works meant Holme Fen became drier. Sir Robert Cotton had taken an active role in the planning of the draining of the Bedford Level and his son, Sir Thomas Cotton began the drainage in his lands in Holme and Conington.  All across the Fen, people were vehemently opposed to this particularly where they would lose their rights on common land and they filled in dykes as quickly as they were dug or else they rioted as the local people did.

In 1632, whilst workmen were digging out the dykes on Holme Fen, John Castle, of Glatton ordered his servants to prevent his cattle being driven from the fen.  Shortly afterwards many men and women from Holme went into the fen brandishing scythes and threatened anyone who would drain their fen.  The local commoners then mowed the fen and drove on their sheep.  Castle tried to get the people of the neighbouring villages to contribute to a fighting fund to petition the king .  It is not known if they prevented the enclosure of the Fen at that time, however, the first phase resulted in the bankruptcy of many of the Adventurers, the work only stopping briefly for the Civil War but recommencing again in 1649.  Robert Castle, possibly from the Glatton family, appears to change sides and became a shareholder in the Bedford Level Corporation.

The back road to Conington is called Pingle Bank and Pingle means enclosed lands.   The farmhouse at Top Farm was originally built in the 17th century with additions in the 1850s and is probably the oldest surviving house remaining on Holme Fen.  The present road running alongside Holme Brook continued to Top Farm, previously known as Fen Farm, and when the railway was built had its own crossing for access. 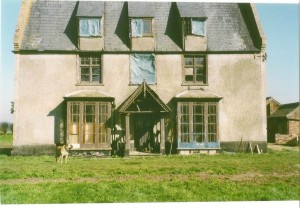 Top Farm
One of the oldest surviving farmhouses remaining in Holme Fen. This picture was taken in the 1980s prior to restoration. The house dates back to the 17th century with additions in the 1850s.

By the 18th century, the draining of the peat fens resulted in the shrinkage of the land with the rivers and dykes being higher than the land they were draining, with the consequence that the land was frequently under water.   Much is documented about his great grandson’s draining of Whittlesey Mere but in 1775, the first of the Holme William Wells (1729-1805) was granted permission by Parliament to drain Holme Fen and erect windmills to lift the water into the rivers. 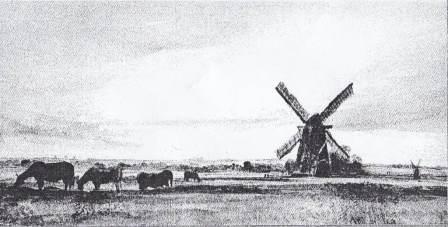 Hawkins Mill, erected in 18th century, on Holme Fen with Whittlesea Mere in the background.

The introduction of steam pumps meant the Fens were being kept dry more successfully. The mere had actually dried up in the summer of 1826 partly because of a dry summer that year and also as the surrounding land was drained the level of the mere was dropping.   In 1844, an Act of Parliament enabled William Wells and several other landowners to begin the draining of Whittlesey Mere.  The draining of the Mere was started in 1845 and completed in 1851. The draining of the mere is a story in its self and more details can be found on the Yaxley History Society and Great Fen websites.

The reclamation was not without its difficulties as in May 1852, during a particularly dry spring, men were burning sedge on Holme Fen to clear the land when the fire spread and destroyed standing crops.  It is reported that an area of 6 miles by one and half miles across from the edge of the old mere to Conington Fen was badly burnt.  The fire was spectacular enough to be reported in the Times and the Guardian. Unfortunately the mere flooded again in November 1852 as an excessive amount of water put pressure on the banks.  A new Appold pump was more successful in keeping the land dry.  William Wells claimed the biggest part of the drained mere, the rest was divided between Lord Saye and Sele of Farcet, the Dean and Chapter of  Peterborough Cathedral and Earl of Carysfort.

Peat soil can either be clayed to improve its performance by the addition of clay or by burning and paring.  William Wells  took some of his clay from his park using a horse drawn railway track,  those of you who have walked the footpath to Stilton will have seen the resulting dips in the grass field behind the church.  There are also some clay pits in Denton Fen. 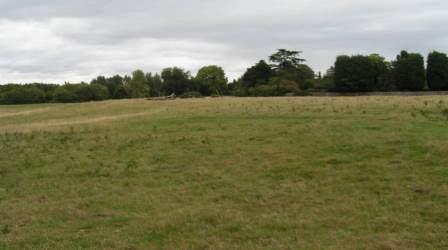 Holmewood Hall park with the hills and hollows created when William Wells dug the clay to mix with the peat to improve the soil.  The footpath to Stilton crosses this field behind the church.

He also instigated the erection of the Holme Fen Post to measure the shrinkage of the peat. 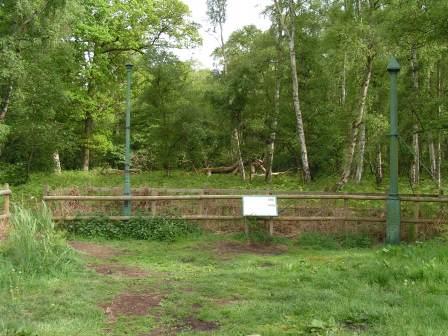 Holme Fen Posts, erected by William Wells to measure the shrinkage of the peat after the draining of Whittlesea Mere.

Horses are reported as sinking into quicksands 25 years after the draining and they still had to be well padded even after then.

Part of the old reed bed and light land went out of cultivation in the 1880s, probably as marginal land, the agricultural depression did not make it viable.  Silver birch trees then grew in the place of crops and were used as pheasant cover.

In 1924, Squire Fielden paid out of his own pocket for new pumping stations and oil fired engines at Black Ham and Whittlesey Mere. It was not until the introduction of  efficient land drains in the 1960s that the whole of Holme Fen could be said to be completely drained successfully.  This has now been reversed and the Holme Fen is being flooded once again as part of the Great Fen project.