After the Cottons acquired the estate in 1611 it did not take long for them to be in dispute with their tenants in Glatton cum Holme.  In 1618 Robert Castell of Glatton and 7 other copy-holders brought a court case against Sir Robert Cotton. They stated they had wished to buy their lands but he had persuaded them to let him do so instead on the understanding that he would ensure they would continue to enjoy all the rights granted to them in 1589 by Elizabeth I.  He counter argued that they were claiming rights of custom to which they were not entitled.  In 1627 the judge ruled mainly in favour of the tenants but also conceded some rights to the Cottons.

Two characters from Holme made their mark on the outside world during this period in very different ways:-

In the 17th century there were constant rumours and fears of Catholic uprisings.  Three residents of Holme, Richard and Henry Sawyer, mole catchers, and Richard Johnson, blacksmith, were responsible for the spread of one of these rumours and in 1633 were tried and imprisoned in the Fleet in London for doing so.

A Scotsman had told a man in Stilton of a plot that Charles 1, who was supposed to visit Scotland, would be held there and not allowed back and a Catholic uprising would then take place.  This rumour was then passed to his brother-in-law, Richard Sawyer of Holme.  Richard then passed the information to his son, Henry who was working for Lady Digby, at Gayhurst, Buckinghamshire.  The Digbys had been involved in the Gunpowder plot and were known Catholics, Henry then embellished the tale by saying his employers were stock piling arms. This story was then passed all over the local area raising panic.

In his book, “Memoirs of the Ingenious” by J De La Crose written in 1693, he refers to a Sarah Hastings of Holm  in Huntingdonshire 1 mile from Stilton.   She and her mother were well known healers, their speciality seemed to be diagnosis of worms where ever they appeared in the body, drawing them out with a goose quill.     Her mother had demonstrated her skills at Whitehall in 1642 in front of Charles I .  Their fame as healers were also known on the Continent.

There were still a family called Hastings living in the village in 1743.

The Cottons Legacy to Holme

Two charities were set up by one of the later Cottons, Sir John Cotton, these still benefit the village to this day.  In 1730 the plight of the poor  in Holme was such that he left money to be distributed to them at Michelmas to alleviate their distress. In 1731 he left money in his will to provide the poor with an education.

Some girls also benefit from an education with money left by William Heinson in 1719 for the education of  12 girls from Holme and Glatton to be taught how to read, sew and knit. 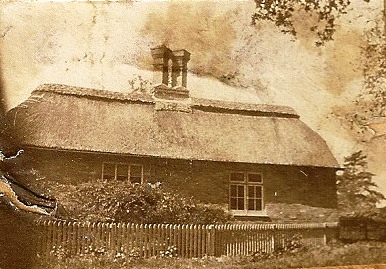 This building on Church street opposite to the entrance to Holmewood Hall was the old National School. After the school moved to its present site, in 1867, the building was the estate office. 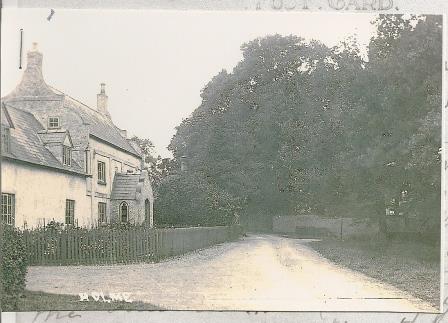 This house stood opposite to the entrance to Holmewood Hall. It had Dutch style gable ends and was believed to date from the late 17th century. Although listed by the 1926 National survey it was demolished in the 1940/1950s.

When he acquired the estate in 1770, William Wells had his land surveyed and a detailed field map drawn showing all the tenants and their property holdings.  This map is held by the Huntingdon Archive office and shows that the village probably had not altered much in size since the Middle Ages with houses along the existing Church Street, Short Drove and the western part of Station Road.  A road surrounded the Church, part of which can be seen near the footpath to Stilton and also at the back of the Church, several houses had been built around this road.  The wooded area in the vicinity of Holmewood and Holmewood Crescent existed much as it is today and were named Great Wood and Little Wood.

We also have a brief description of Holme from one of the party accompanying Lord Orford on his journey  around the Fens on a converted lighter in 1774. They spent several days on Whittlesey Mere and on 1st August they sailed up Holme Lode to Holme.  They record the Lode as tolerably clear and navigable. “The appearance of the place did not invite us to take a more accurate view of it on shore being built in the fashion of the country, of clay houses covered with thatch but well fenced by wood to shelter it from the weather”.

Brickyards existed south west of Holme Lode and are mentioned in the 1775 Holme Fen Drainage Act.

Thomas Wells is believed to have written two odes, “Ode to the Naiads of the River Holme”, and “Pindaric ode to Cloacina.”   He refers to the “rustics” chopping down and burning some of his beloved trees and then they hanged of an effigy of him from a tree, it is not quite clear what had prompted this. The double corners where the public footpath turns to go across the fields to Stilton is known as Hangman’s corner. There are three possible reasons which made him unpopular with the locals.  Although it was his father, William Wells, that had instigated the further draining of Holme Fen they may have erroneously blamed him for it, or it could have been that in 1798 a road  was built from Holme Lode to the Great North Road (possibly what is the old carriage road at the back of the Hall), which was  created as a toll road, or it could have been  the 1809 Enclosure of Glatton and Holme. 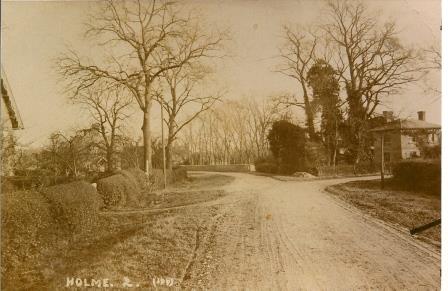 Hardwick House on the corner of Station Road and Church Street. The back of this house dates to the 18th century with 19th century additions.