The Village under Squire Fielden

When Squire Fielden bought the Holmewood estate it consisted of 680 acres of parkland and had 20 tenanted farms.   Fielden sold the Glatton part of the estate in 1918.  The estate was reputed to employ 100 people including craftsmen, keepers and other estate workers. Before the war broke out he had employed 10 household servants mainly women and boys.  Village people were not encouraged to go into the house.  His life revolved around pheasant shooting and he employed 5 gamekeepers and much of the woodland in the area probably survives because of this.

He built the reading room for the village in 1905, probably his intention was to keep his workers from the pubs and to improve themselves.  Some of the time it was used to play billards, later in its life it was used as the dining hall for the school and also been a shop, an office and now a private home.

Reading Room built by JA Fielden in 1905 . The war memorial has been moved to the Church and is now a private house.

Squire Fielden was rumoured to only allow washing to be done on a Monday.  The truth of this  is lost in the mists of time, however the village  pump on the corner of Park Close and Church Street was locked for some of the day and villagers only allowed to use it at certain times.  It may be that extra water was pumped down on a Monday to allow  for wash day. 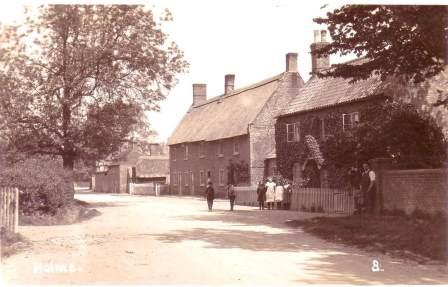 The house to the right was occupied by Mr Chapman, the water engineer. The village pump was on the opposite side of the road on the corner of Park Close. Water was piped to the pump from Stilton Spring Farm.

August 1912 saw very heavy rainfall and is remembered as the year the harvest was got in by boat.  Holme Brook overflowed and the road at Pingle Bank was badly flooded.  Improvements in drainage mean that this no longer floods although people can remember it still doing so when they were young in the 1960s. 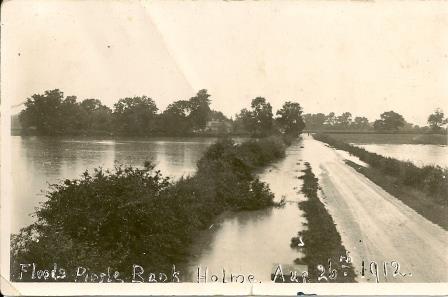 Floods at Pingle Bank 1912, looking towards the village from the bridge.

By July 1915, 35 men from Holme had volunteered to fight in the First World War.  The War memorial commemorates 18 men who died and 58 men who also fought.  One of the survivors, John Lawes gained the Military Cross with bar.  He has a remarkable story –

Born in Holme to George and Alice Laws, he was the youngest of 8 children.  His father was a farm labourer, living in Holme Fen, probably working for the Selby family of Top Farm.

He was educated at Holme School and then won a scholarship to Ramsey Grammar School with a bursary.  He was a student teacher in 1912 at Holme School earning £22.00 per annum leaving in 1916 to teach at St Michael’s School in Stamford.  On 15 June 1917 he married a Miss GM Hughes in Stamford.

In June 1916 he was gazetted as a lieutenant in the London Regiment and in the same month was awarded the Military Cross with the following citation.

“For conspicuous gallantry and devotion to duty. Thanks to this officer’s courage and initiative, two Stokes mortars were carried forward under heavy fire in full view of the enemy, and successfully registered on an enemy trench. He has previously done fine work”. (London Gazette 16 September 1916 page 10977)

He was subsequently awarded a bar to his MC  “In an offensive action against the enemy on the 1st September 1918 at Priez Farm, S.E of Combles, this officer displayed the greatest courage and devotion to duty in reconnoitring hostile machine-gun nests under extremely heavy fire, personally accounting for several of the enemy. The action when completed yielded six machine guns and 130 prisoners”. (M.C gazette 16 September 1918).

In November 1918, Holme School presented him with a fountain pen for winning the Military Cross and bar.  He told the pupils “he was proud of his old school as were all the other old boys at the front.  He had simply did what he considered his duty.”

On 30 June 1919 he was promoted to captain but there is no more information about him after that date.

There is a note on the back of a frame for  a certificate of merit from Ramsey Grammar School, awarded to Ada Merrishaw, which says “This frame is made of wood from the propeller of an aeroplane flying from Lincoln to London Easter 1917 fell and smashed at Holme Huntingdonshire during the Great War 1914 to 1918”.  No other information about this has been found to date.

The space between the old and new parts of the village was partially filled when in 1921 the first of the social housing was built along Station Road near to Pingle Bank.

Local people once again played their part in the Second World War with three men losing their lives.

Although not in Holme Parish, RAF Glatton, built in 1943, was visible from the village from the B660.  A local resident, still only at school, remembers that as a boy he and two others were sent to help  with the building for one day when someone came to the school to ask for volunteers.  However the bomb dump was in Holme Parish along the B660.   Many of the children of that time remember the Christmas parties and that they were allowed to go to the cinema there.

In December 1944 a plane from Conington failed to take off and slewed across the railway and hitting a house on the opposite side.  Fortunately no one in the house was hurt and there were no trains on the line at the time. 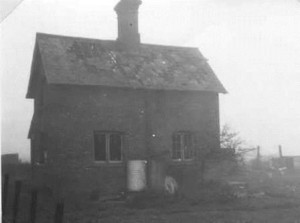 The cottage on the opposite side of the railway damaged by plane from RAF Glatton slewing across the railway line in 1944.

On Holme Fen  the wood was used to make charcoal during the war and a searchlight party was stationed there.

Squire Fielden died in 1942 and left his estate to a London hospital.  It could not make use of it and when the National Health Service was created in 1948,  it became Crown property once again.

When the D Day invasion was being planned it was realised that the Resistance in occupied Europe needed to be supplied so that they could disrupt the German Army.   The United States Office of Strategic Services (OSS) then set up a packing station on the site in January 1944.  Holme had the advantage that it was near to the London Edinburgh rail line and the Great North Road (A1).   Supplies were brought by civilian lorries from the station and then packed into canisters which then had a parachute attached.  Local people remember seeing  planes doing practice drops of these canisters in the park, this was done to check the loads were properly balanced.  The packed canisters were then taken to RAF Harrington, near Kettering and  loaded on planes to be dropped to the Resistance fighters.

Some agents were isolated and had their last six weeks of training at Holmewood before they were parachuted into Europe.  They also held practice raids for Norway.  Holme may seem an odd place for OSS to use to train for an operation in Norway but the Norwegians were asked to concentrate on sabotaging the railways and it was probably chosen because of the woodland and the railway, obviously not its mountainous terrain! The site was closed in December 1944 having played a crucial part in the liberation of occupied Europe.

John Ford, the American film director made a film of the operation here at Holme and at Harrington.  This was used for many years in the training of CIA operatives.  Local people had no idea of what happened on the site apart from being told they would be shot on sight if they tried to enter the camp.  It was not until 1981 when a local resident happened to talk to a visiting World War II American officer, Colonel Stroud, that the story came out. 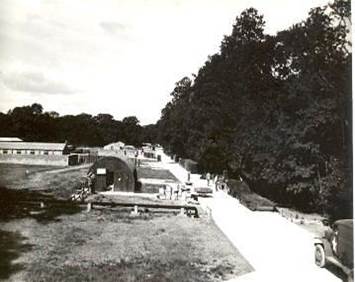 Some of the buildings of Site H along the old carriage road to the A1. Remains of the blast walls can still be seen today.

The Nissen huts used by the NCOs in Holmewood were then used as social housing.  For many villagers this was the first time they had lived somewhere there was running water and electricity and  most of the older villagers who lived in them had very fond memories of their time there. The huts were replaced by the houses around the green in the 1960s. Many of the other houses in the village were knocked down and replaced as they were not fit for human habitation. Holmewood Crescent was built in the 1970s whilst the next big development took place when St Giles Close and Spinney Fields were built in the 1990s/2000s 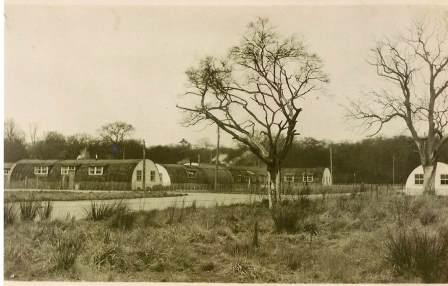 These Nissen huts were sited on the present green in Holmewood and were used as offices and the NCO’s quarters. They were later used as housing after the War.

The Ramsey line closed to passenger traffic in 1947 and passengers were unable to board the main line trains at Holme after 1959.  The line continued to be used for freight until Holme Station completely closed on 31 October 1970.

In the 1950s parts of Holme Fen became a National Nature Reserve as some of the old plants and  species still survived despite the drainage.  Today it is now part of the Great Fen Project where the old Fenland is being restored. Many houses in the Fen have been demolished as the number of people needed to work the land has decreased.  In 1911 almost half  the population of Holme had lived over the railway line in Holme Fen.