There is some evidence of occupation before the Middle Ages, an archaeological survey,prior to the building of St Giles Close, found remains of Iron Age ditches.   There have been some finds that indicate a Roman- British occupation to the north west of Holmewood and some Roman brick kilns have also been found at Engine Farm on Holme Fen.

The 12th century Norman arches, retained when the church was rebuilt in 1861, seem to confirm the 12th century as the settlement of Holme.  The original building was a chapel of ease as the main parish church was at Glatton.  There have also been some finds of 12th century pottery.

The Medieval period was one of the most prosperous  periods in the Fens until more modern times.  It would appear that Holme benefited as well, as it was not only a market town but also an inland port.  There is no charter for the establishment of the town but was known as a prescribed borough which means it existed according to custom and practice.  Holme  is frequently referred to as Holme town or township until the mid-19th century.  A law suit in 1314 states that “merchants  came up the river from King’s Lynn and especially to the King’s town of Holme situated on the river with its market and fair”.

The date Holme Lode was dug is not known, Yaxley Lode was dug in Anglo-Saxon times but others in the area were dug during the 12th/13th century.  However, access to Whittlesea Mere would be difficult without this as there was a bog between  the village and the mere and the only way to reach the mere for much of the year would be by water.  A branch of the River Nene flowed through the Mere so the town had access, via the river system, to the ports at Wisbech and Kings Lynn.  Holme Lode came into the village as far as the grounds of Holmewood Hall where today a very wet patch, now turned into a pond, is thought to be where the Lode was wider to allow the turning of the boats. 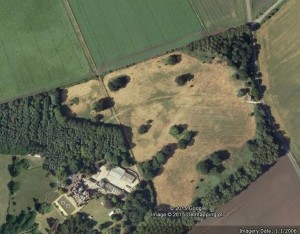 The Victoria County History for Huntingdonshire, entry for Holme,  states that Baldwin de Riparia established a deer park in Holme around 1218, however some doubt some later research has been cast on this.

The 1279 Hundred Rolls for the Norman Cross Hundred have survived and these give further information about Holme.  The roll shows that the town consisted of 8 burgesses, 42 cottars(poorer serfs who had little land and spent most of their time working for the Lord of the Manor) and 5 freeholders.  In 1297, Thorney Abbey leased the town from the King and the number of burbages (houses with a garden or strip of land usually rented) had increased to 23.

The records show that Holme  had a market in 1279 .  There are remains of the base of a 13th century cross base still outside the church which originally stood on the small green outside the Church, until it had to be moved as one of the vicars kept hitting it with his car.  In 1314 Edward II granted a charter to establish two fairs St Giles on 1 September and Saint Gregory on 12th March.  The town also had a guild.

There is a reference to the” bocus de Holme” in 1248, in the Pleas of the Forest for Huntingdon, at an inquisiton at Yaxley.    Sir Henry de Engayne had been hunting in the woods when the next day three unknown men were seen to be chasing a buck believed to have been frightened out of the wood from the previous day. They chased it towards Yaxley when it was stopped by a page coming from Woodston who  struck it with an axe.  The men then took the buck from him and returned towards Holme.  All the people of Stilton, Folksworth, Yaxley Caldecott and Morborne as well as those of Holme were asked if they knew who the men were but all denied knowledge of them., possibly because their punishment would be death.  The page was jailed for his part, Richard of Stilton was also tried for standing on a pile of turf and saw the two men but did not raise the hue and cry.

From archaeological surveys in 1992, it would appear that  farming took place on the higher land towards Glatton behind Holmewood Crescent as there is evidence of ridge and furrow in those fields.  People would be supplementing their income by using the resources in the Fens such as fishing, wildfowling, cutting of turf and using the sedge and reeds.

In 1308 there was a dispute between Agnes and Thomas de Holme and the Denton men when both accused each other of cutting the turves of the other.  Thomas and his mother Agnes still appear to be living in Holme in 1327 when they appear in the tax returns for that year.

In 1386 the market was not making any profit and it did appear to be operating in the 15th century.  Not only were there too many fairs set up but with the rivers in the Fens frequently changing course, navigation to the coast became more difficult and, along with many of the fen edge communities, Holme’s period of relative prosperity declined.