The First Houses on the Site

There are some references to a Hall in old documents but not much information regarding this.   The St Giles Close archaeological survey found evidence of medieval ponds which they thought indicated that a medieval hall could have been sited there.  The copyholders, who took Sir Robert Cotton to court, state there was a separate manor house in Holme in 1618 but the site of theses buildings are unknown.

The land upon which the House stands is low lying compared to the rest of the village and it is likely that the first house was built after the local Fens were drained in the 1630s.  In the summary, by the Bedford Level Corporation, of the lands considered drained this area of land was included.

The hearth taxes of 1662 and 1664  show the largest houses in the village had 4 hearths, 1 or 2 hearths meant you were considered too poor to pay the tax, so any house on the site would have been fairly modest. 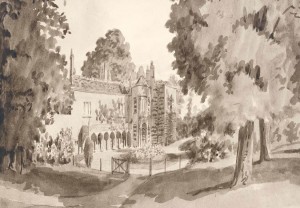 The 1775 Holme Wood House from a drawing by Rev. Edward Bradley.

This picture is of the 1775 house which was known as Holme Wood House.  As Vice-Admiral Wells had several children christened in Holme church in the 1780s,  it appears that he, rather than his father William, lived in the house.  He inherited the family home at Bickley Hall in Kent, when his father died in 1805, but sold it to his brother John.

From the 1770 field map a building stood on the site of this house but it is not known if the Wells just extended that property or completely rebuilt it.

The house was rented out from 1826, after Capt Wells died until his son William Wells became of age in 1839.  The advertisements in the local newspapers describe the house as a “Capital Mansion” but do not state the size of the house.  All the furniture seems to have been sold along with the contents of the cellar.  The cellar contained 78 dozen of Maderia, 34 of claret, 77 of Port, 45 of Sherry, 9 of Malmsey 3 of Champagne, 3 of Malaga, 8 and half of Vin de Grave, half dozen of Constantia and Frontiniac, 2 and half of Hock, 2 of Burgundy, 6 of Packarreita and 13 of Cape Maderia.  Externally there were coach houses, stables, granaries large gardens and pleasure gardens, orchard homestead and farmyard.

The accounts for the estate show a large number of repairs had to be done in 1844.  Some old cottages were knocked down and replaced by the walls now surrounding the house.  William Wells (1818-1889) also filled in the Holme Lode and built a new carriage way from the house to the Yaxley Road and erected a gatehouse at what is now known as Woodman’s cottage.

William Wells extended the House between 1873 and 1877, part of the old building was demolished and then three new fronts added.  The old part of the house  at the back was then used as the servants quarters.  Some dormer windows from the old building were incorporated into the new and dressed to blend in.  The new part was built in the Tudor style in red brick.  The gate house was built in 1877, but the gates are dated 1631, the first floor of this building was used as a game larder.

The drawing room has an exceptionally large fire place, according to William Young  the architect, this was built on the wall of the of the old house to tie the new and old parts together.  There are several 17th century items incorporated into the new house including part of the staircase.  Rev. Edward Bradley recounts that William Young had designed the staircase so that William Wells could display his Landseer picture of stags to the best advantage.    The Wells were great art collectors and Rev Bradley says that a list of the works of art would occupy too much space.

The gardens were revamped at the same time as the house and were a prime example of Victorian gardens but unfortunately many of the features have now been lost. 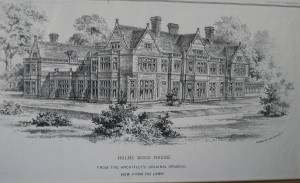 Architects drawing of the alterations to Holmewood House for William Wells in 1873. 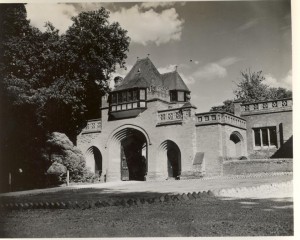 The Gatehouse at Holmewood Hall, picture taken by one of the US servicemen in 1944.

After the OSS departed, the house was left in bad repair.  Sir John Wells, a descendent of the Wells family, bought the house and part of the park.  He reports that the house was empty except for a marble carving of a child’s hand, wet was coming in everywhere and the main stairs were crumbling but the yellow silk panelling was still on the drawing room walls.  He found that restoring the building was too much and he then sold the property again to a timber merchant who in turn sold it to British Sugar.

Initially British Sugar used the site for their research department and the house was turned into flats for some of their workers.  One ex-resident recalls that there were stairs put into the billiard room so that his flat could be reached.  Their coal hole was part of the bay window of the billiard room looking out to the park.  British Sugar then built some houses for their workers, in Wells Close.   The manager at the Hall, Colin Bradford, started the restoration of the Hall to its present state.