An agricultural survey of the country was published in 1813 and it gives a picture of Holme in the early part of the 19th century.

The major landowners were the Wells and Mr Clarke and Mr Gee.

The village consisted of 6 farmhouses, 10 dwelling houses and 10 cottages (this may only account for the Wells family holding).  The farms varied between 30 to 200 acres with field sizes of 6 to 20 acres  enclosed by quick thorn hedges.  At that time the highland warranted a larger rent of 25.0 per acre as against 15.00 for the Fen.  The farms consisted mainly of sheep and pigs with a few cows and horses.   The agricultural revolution does not seem to have reached Holme as the old crop rotations were still in place with one year fallow followed by wheat or barley followed by oats or barley. The agricultural workers were better paid than some of the surrounding parishes, 12s in winter when they worked from light to dark and 18s in summer plus beer when they worked from 6.00 am to 6.00pm, apart from harvest when it was light to dark.  Water was obtained from ponds.

The survey also reported that the roads were in a very bad state.

Advertisements in the local newspapers as well as the estate accounts show that the sale of wood was  also very  important to the economy of the Holmewood estate.

Captain William Wells was on the bench at Huntingdon Assizes when Wm Speechley, of Holme, was tried for stealing three lambs from Wm Moyses also of Holme.  Wm Speechley was sentenced to death for this offence.

Holme in the later 19th Century

William Wells (1818-1889) started to make many changes to the village. In 1844 he had the Holme Lode filled in from the front of Holmewood Hall and across the park as it was about to be cut off by the railway.    Many old cottages were knocked down and street drainage improved and a wall built to encircle Holme Wood House. 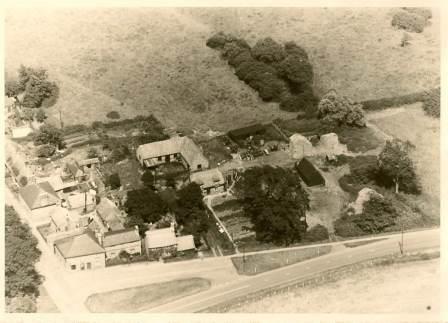 The corner of Station Road and Short Drove. The village had not expanded beyond this point until the 1840/1850s. The remains of the brick kiln can be seen on the right, with the trees to the north show where the brick pits were.

The other major change to the village also took place at much the same time as the drainage of the mere with the arrival of the main London to Edinburgh line.  Up to this point the village does not seem to have expanded beyond the original settlement along Church Street, Short Drove and the part of Station Road between these two points.  Holme station opened on 7 August 1850 and with it the development of the village around the Admiral Wells.    Several railway cottages were built along the Yaxley Road, which still stand but also others along Long Drove towards Ramsey which are now demolished.

In 1853 the Great Northern railway dug a cutting from the station to New Dyke so that the waterways could still be used primarily to take coal to Ramsey.  The roads in the Fens were so poor until after the second World War that this was the best way to bring goods to and from the station.   Mary Ann Ayres, when a girl in the late 19th early 20th century recounts moving from Engine Farm to Moat Farm in Woodwalton using a barge. Maxey Stacey and John Bliss remember swimming here in the 1940s with the water being black as barges continued to take coal to the pumping stations. 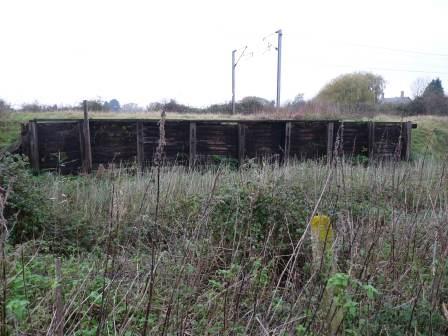 The remains of the quay on the canal built to connect to the New Dyke next to the Station in the 1850s.

An  1854 directory for Huntingdonshire shows that the present public house, The Admiral Wells, was just known as the Admiral, the 1940s Kelly’s directory shows it as the Admiral Hotel.  The directory also lists the Railway Arms standing on the corner of Pingle Bank.   The 1854 directory also shows two other beer sellers in The Doles which is behind the Railway Arms and maybe The Pig and Whistle got its name from that time.  Rev. Edward Bradley also says there was another pub called Man O’ War . There was also the Ship Inn the exact location of this is not known but it is believed to be somewhere opposite Holmewood Hall on Church Street. (Edward Bradley comments  on the number of pubs with village sea faring titles in an inland village). 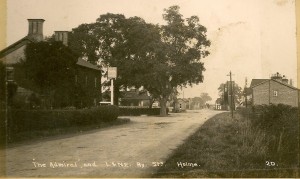 Admiral Wells on the left looking towards Holme station.

William Wells’ income increased with the draining of the mere and he continued to reinvest much of that money into the village.  He was remembered as a generous and kindly landlord, the Stamford Mercury reports in 1867 that he had reduced rents to his tenants when they lost their cattle because of a cattle plague, possibly rinderpest.  He improved and rebuilt much of the village as follows:-

1861   The Church rebuilt after separation from the parish of Glatton.  More about the history of the church can be found in “The History of Holme Church” by J. Osbourne and P. Thomas from  info@holme-parish.co.uk

He continued to improve the living conditions of his tenants and workers with several farm cottages  being built during this period.

He felt the draining of the Mere had improved the lot of his tenants and their workers giving them more secure employment.  The ague, a malaria type disease, was a constant scourge until the removal of the waters from Whittlesea Mere also improved their health.

One of the Wells’s tenants, Mrs Mary Coles, a farmer in Holme,  had a very large fire which destroyed her farm buildings along with some of her stacks and other goods .  The fire spread and destroyed  a neighbour’s, Mr Joseph Peak’s hovel, pig sty, gig and fruit trees along with twenty tons of rye grass.   Three thatched cottages on the opposite side of the road, occupied by Mr Binder, Jas Everitt and James Clark were destroyed.

William Wells did not have any children so his brother Grenville inherited the estate.  Unfortunately the estate had left mostly debts and although the draining of the Fens had benefitted William Wells financially at first, the import of corn from the Americas in the 1880s, which was much cheaper than produced here,  created an agricultural depression.  Farmers frequently had to abandon farms as they could not make them pay.

Lord De Ramsey purchased the estate and held it for approximately 20 years with Holmewood Hall let to tenants. 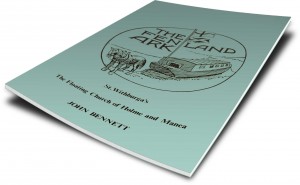 In 1897, the Rev George Broke, the then vicar of Holme, launched what was to become known as the Fenland Ark.  This was effectively a horse drawn barge which went into the Fens around the Holme Parish.    As the church was so far from the people in the Fens and the roads were impassable at times so it was a way of encouraging the Fen people to attend church.   The Ark only plied the waterways until 1901 when it was sold to undertake the same task around the parish of Manea.

Many years later Mrs Mary Ann Ayres, then living in one of cottages at Allen’s Engine, recounts that they would often attend a service on the Ark and later that day walk to Ramsey St Mary’s chapel to attend another service.    Some children from that part of the parish attended Ramsey St Mary’s School as it was nearer.

A book written by John Bennett contains a lot more information about the Fenland Ark and copies can be obtained from Holme Church, :- info@holme-parish.co.uk